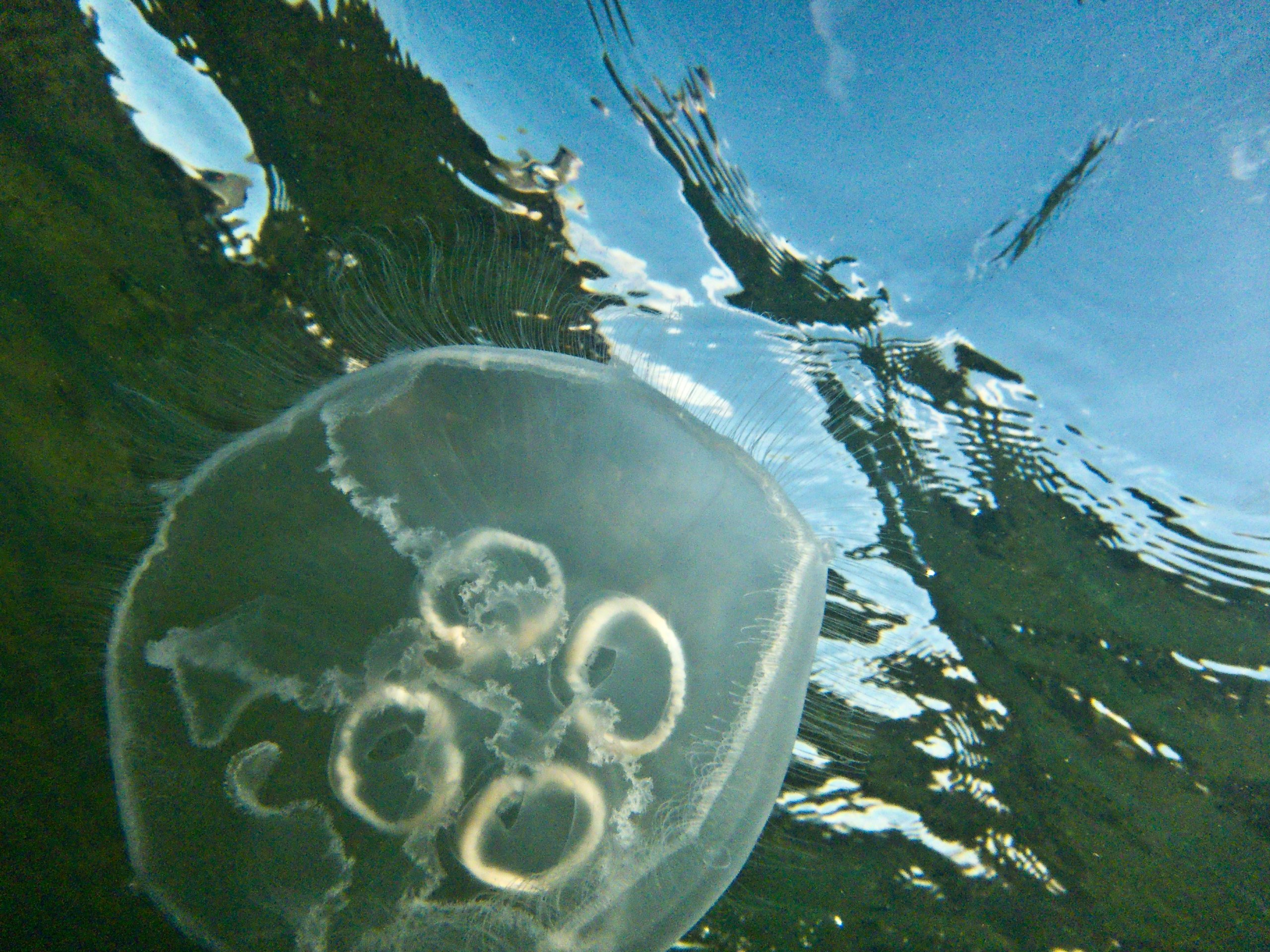 The large jellyfish as you find them washed ashore on the beach belong to the Scyphozoa or “true jellyfish”. Most species consist of a flat disc or sphere from which a number of mouth arms emerge in the centre, with which the jellyfish collects its food. Many species also have a number of tentacles along the bell margin. These tentacles, but also the rest of the jellyfish, are covered with stinging cells. Stinging cells are small poison harpoons that are used to catch prey.

Jellyfish eat all kinds of other plankton, which they filter out of the water with their tentacles and/or mouth arms. The diet varies, for example the barrel jellyfish eats mostly micro zooplankton, and the lion’s mane jellyfish eats mainly larger crustaceans and other jellyfish. Jellyfish consist for more than 95% of water. This is useful, because it takes little energy to grow large and have a large surface area to filter plankton with.

In general there are two different strategies that jellyfish use to catch prey:

With the first strategy you catch a lot of small and slowly swimming prey such as ciliates, jellyfish and larvae of worms and shellfish, which cannot escape quickly enough. With the second strategy you also catch larger, fast swimming animals that are sensitive to disturbances in the water, such as copepods and fish. A nematocyst before (A) and after (B) firing. Source: BIODIDAC.

In order to catch animals that swim against their tentacles, jellyfish are equipped with stinging cells (cnidocytes or nematocysts).  These are cells that are in the skin, with a harpoon attached to a coiled hollow tube that is connected to a vesicle full of poison. There is also a sensitive hair on the stinging cell. When this hair feels vibrations from prey coming close, the stinging cell fires the harpoon, pierces into the skin, after which it discharges its venom. This all happens in a fraction of a second!

The jellyfish we see on the beach or in the water are the reproductive stage. Most jellyfish do not grow very old, about half a year. The life cycle of jellyfish looks like this: 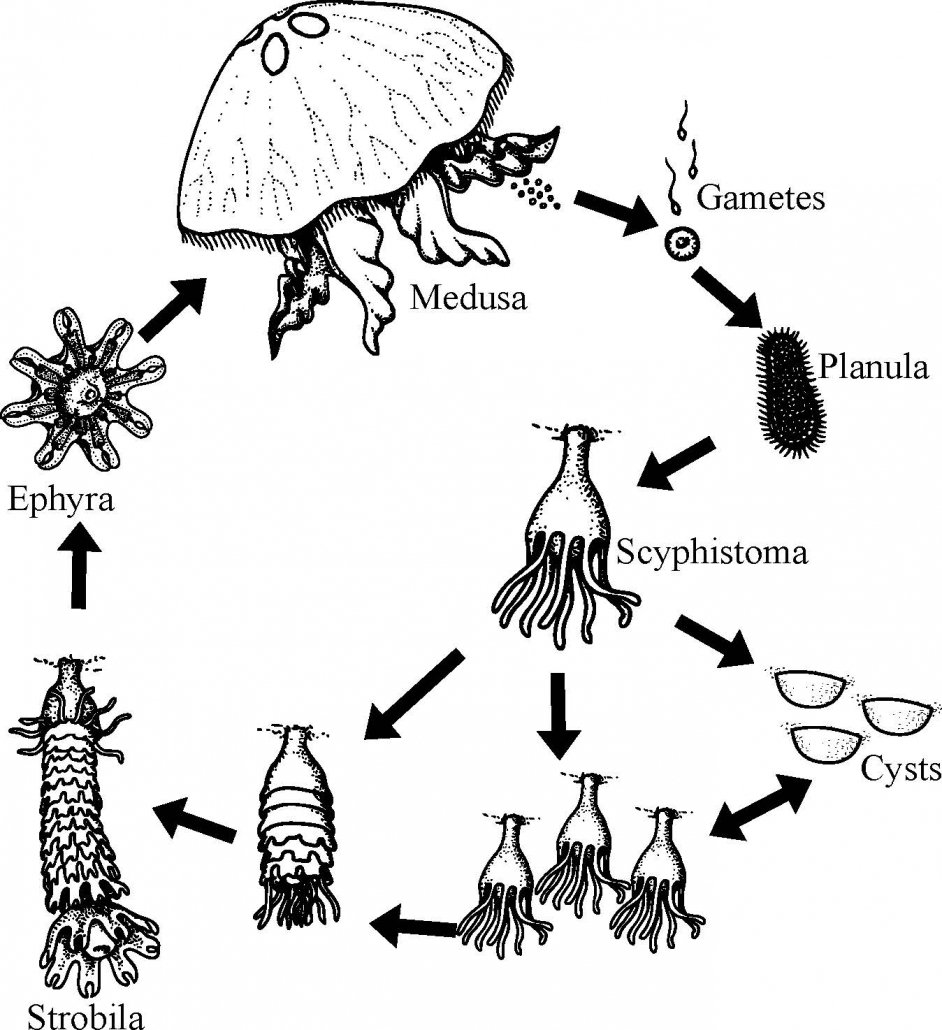 Medusa
The meduse stage is the jellyfish as everyone knows it. Most jellyfish species have separate sexes and are therefore either male or female. The compass jellyfish changes sex during its life. The male jellyfish discharges its sperm into the water, after which it fertilizes the eggs in the female or in the water.

Planula larva
From a fertilized egg a planula larva of about half a millimeter emerges. This larva has vibrating hairs with which it swims. The planula looks for a suitable place to settle down and grow into a polyp. They look for a dark spot with little current. Sometimes they like to settle near other polyps.

Polyp
When a planula larva has found a suitable spot, it attaches itself and turns into a polyp. It gets a number of tentacles with which it can catch food. Polyps are very small, a few millimetres at most. Polyps can reproduce asexually, by splitting, making small polyps from protrusions (stolons), or by making cysts.

Cyst
To survive difficult times, a polyp can turn into a cyst. This cyst has a thick layer of chitin as protection. Cysts cannot eat, but consume very little energy. So they can survive long periods without food, or with little oxygen. From a cyst a new polyp can emerge.

Polyps can reproduce asexually in yet another way. By dividing themselves along the longitudinal axis a large pile of discs is created, which develop into a mini jellyfish (ephyra) and let go one by one. This stage is called strobila. One polyp can release up to 20 ephyras.

The polyps of many species of jellyfish have never been found in nature, while it is important to know where they are so that jellyfish blooms can be better understood and predicted. In my research I first found only moon jellyfish polyps, but recently we also found polyps of compass jellyfish and blue jellyfish,which were never found before!

Jellyfish are radially symmetrical, with a body arranged in a circular pattern, without a clear left or right side.

Jellyfish have a body consisting of a disc or bell, which can vary in thickness from strongly flattened to almost spherical. This disc houses the jellyfish’s senses, organs, arms and tentacles, so you could compare it to a skeleton. The disc is covered on the outside and inside with a thin layer of skin. On the inside, the disc consists of “mesogloea” consisting of long, stringy proteins for firmness and especially lots of water, around 95%.  At the bottom, in the middle of the disc, the skin folds inwards, forming a cavity that serves as a stomach. This cavity has only one entrance and exit, so a jellyfish poops through its mouth. From the stomach run off into the tentacles and into a ring-shaped channel along the edge of the disc, along which nutrients are transported. The muscles of the jellyfish are in a ring-shaped pattern in the disc, and in some species, such as the hair jellyfish, are clearly visible.

The nervous system of jellyfish is a lot simpler than ours. The nerves lie in rings around the disc, connected to a net of nerves that runs through the whole jellyfish. The nerves control the muscles and are connected to clusters of senses at the edge of the disc called rhopalia. In these rhopalia there are balance organs, with which the jellyfish can feel whether it is swimming upright or upside down, and light-sensitive structures that serve as eyes, with which the jellyfish can perceive whether it is light or dark. That’s about it, there is no brain, although there may be some kind of nerve nodes in the nervous network.

Along the edge of the bell are the tentacles, which the jellyfish uses to catch its food. The tentacles are covered with stinging cells. Some jellyfish, like the lion’s mane, have tentacles that can become very long, up to several meters. Other species such as the barrel jellyfish have (almost) no tentacles. They catch their food with their oral arms.

The jellyfish’s oral arms, usually four or eight, also have stinging cells and are also used to collect food. The oral arms arms start in the middle of the disc. In species that mainly eat very small animals, such as the barrel jellyfish, the mouth arms are very finely branched and have many small mouths through which the food is absorbed.

In jellyfish, the gonads are in the bell, against the gastric cavity. Most jellyfish are either male or female, although some species can change sex. In many species both eggs and sperm are discharged into the water and fertilized there, but there are also species, such as the moon jellyfish and the lion’s mane jellyfish, where the female broods the fertilized eggs in the mouth arms.

Zoften looks like a puddle of blue, white or yellowish goo on the beach. The sting can be painful. Its relative the lion’s mane jellyfish Cyanea capillata stings worse, but we seldom see it along the NL coast. Can be observed almost all year round, especially at the end of spring and summer.

Can be recognised by the radial pattern of brownish-red stripes/dots on the bell, like a compass rose. Sometimes long tentacles. Can also be painful. Especially in summer and autumn.

The gentle giant among jellyfish. Sturdy jellyfish without tentacles. Only dangerous for microscopic creatures which it filters out of the water with its mouth arms. Especially common in summer and autumn. In some years sometimes very large specimens wash ashore in spring. They probably survived the winter as a jellyfish, and then continued to grow in the next spring. 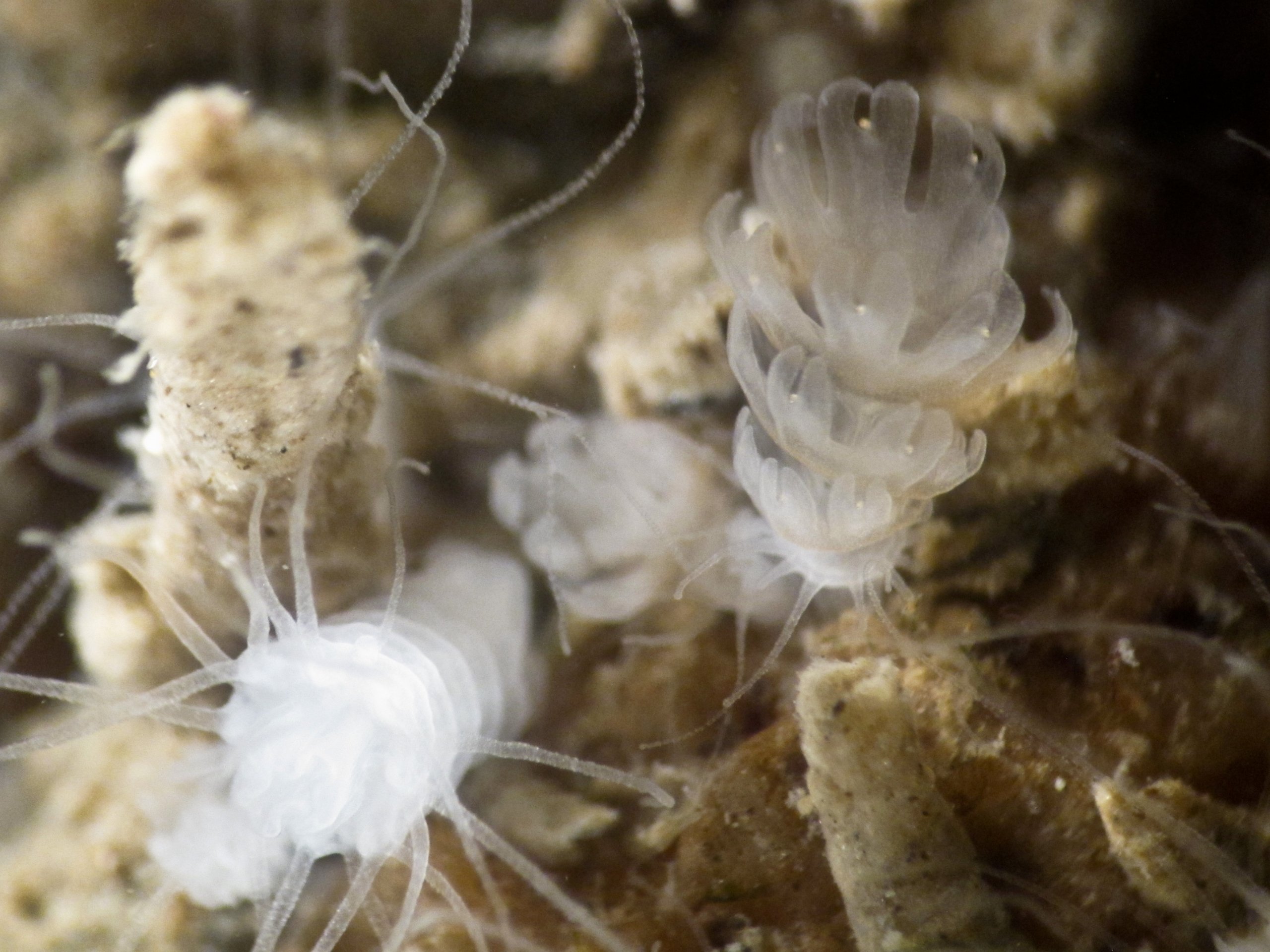 Jellyfish polyps from the Wadden Sea. The polyps are in the process of strobilation; forming young jellyfish.

A large bloom of lion’s mane jellyfish together with a large school of mackerel, both benefiting from a large amount of zooplankton. Filmed in the Gullmarfjord in Sweden.