Hydroids or Hydrozoan jellyfish are related to the “true” jellyfish (Scyphozoa), and like the latter they use stinging cells called nematocysts to catch their prey; venomous harpoons that shoot out when a prey encounters them. Most Hydrozoa live most of their lives as a colony of polyps on the seabed. These polyps release small jellyfish, which feed on zooplankton and reproduce sexually. A larva emerges from an egg and, swimming with vibrating hairs, looks for a place to settle. However, virtually all exceptions to this life cycle also occur!

From Dutch waters around 120 species are known, but probably a lot more species occur, as little research is done on this group.

The life cycle of Hydrozoa is very similar to that of disc jellyfish. They, too, have separate sexes. The polyp stage can reproduce asexually and form colonies. Small jellyfish grow on these colonies, which let go, grow and reproduce sexually. The fertilized eggs develop into a planula larva. This larva swims through vibrating hairs and looks for a suitable place to settle. When this is found, the larva turns into a polyp and the cycle is complete. 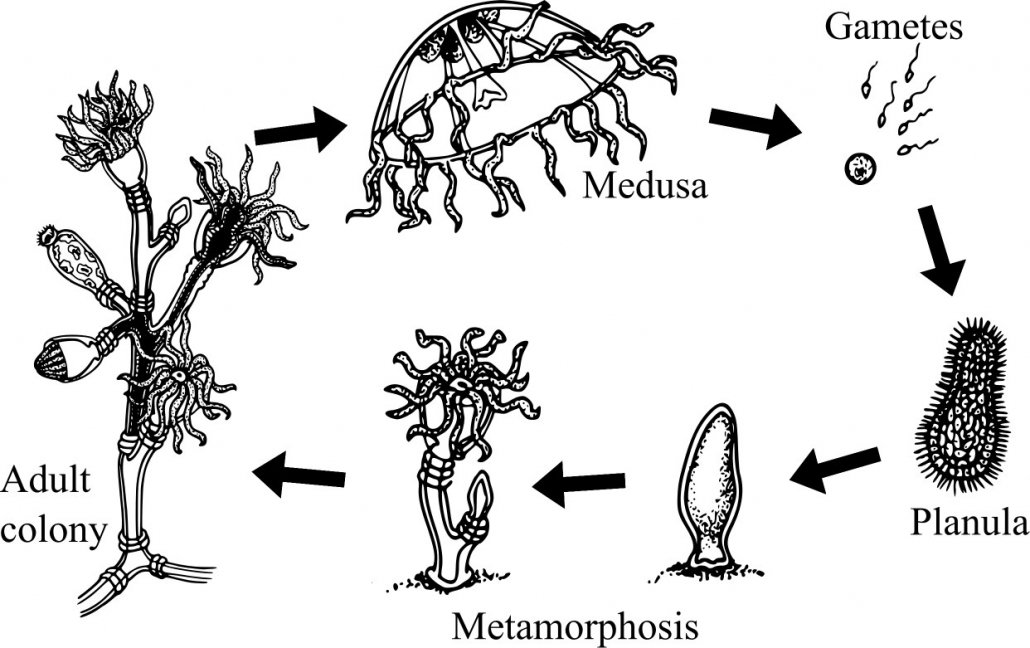 Pretty clear, isn’t it? No, because just about all possible deviations from this ‘general’ life cycle are possible! For example, there are species that do not bud off jellyfish but make gonophores: buds in which gametes develop. Other species, such as the by-the-wind-sailor (Velella velella) and the notorious Portuguese man o war (Physalia physalis) form colonies of polyps that are not attached to the seafloor, but float.

The jellyfish and the polyp often do not resemble each other at all. That is why species were often “discovered” twice in the past, whereby the jellyfish and the polyp were described as separate species. Later it was discovered that the two “species” were actually two stages of the same animal. Nowadays it is much easier to find out which polyp belongs to which jellyfish, by means of DNA techniques. 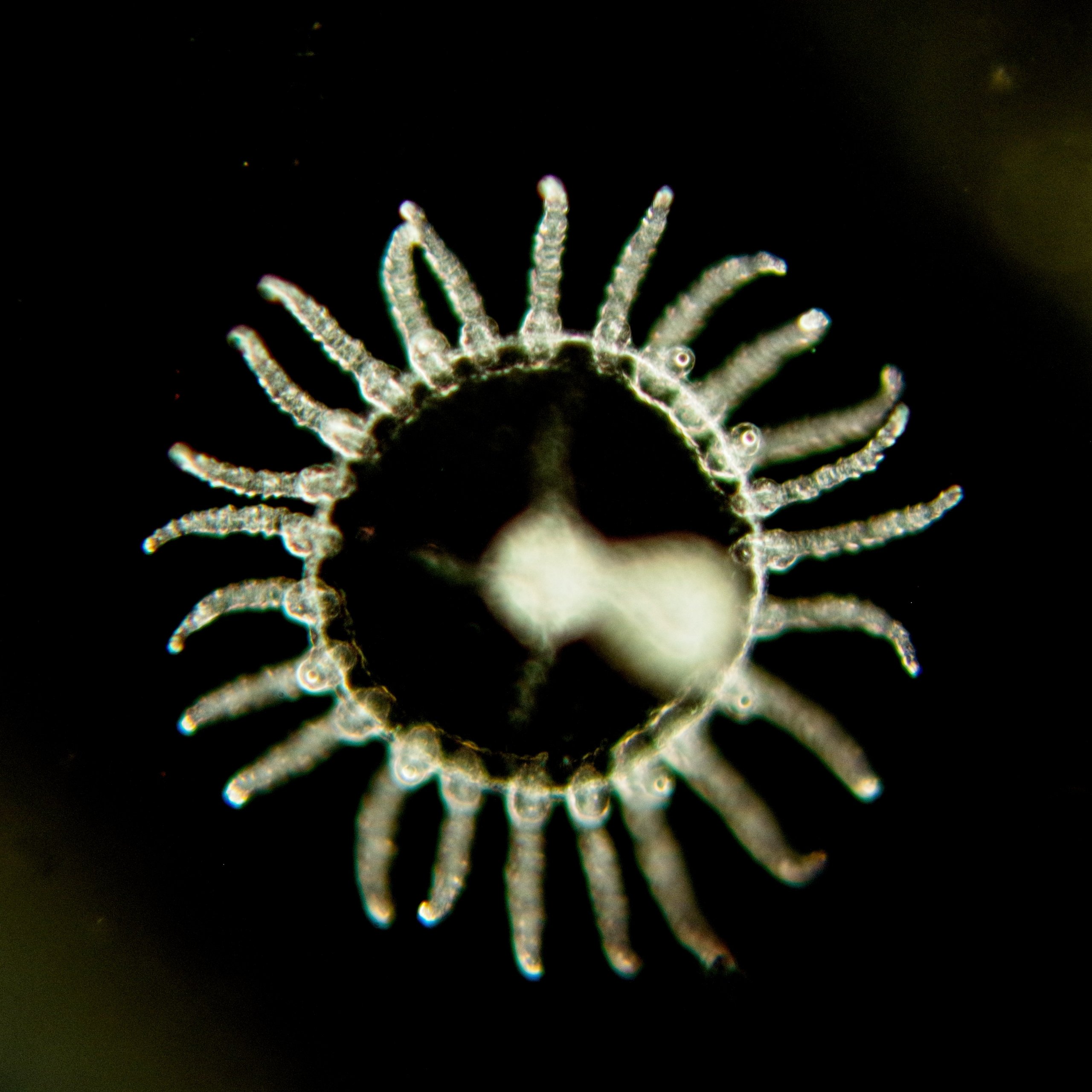 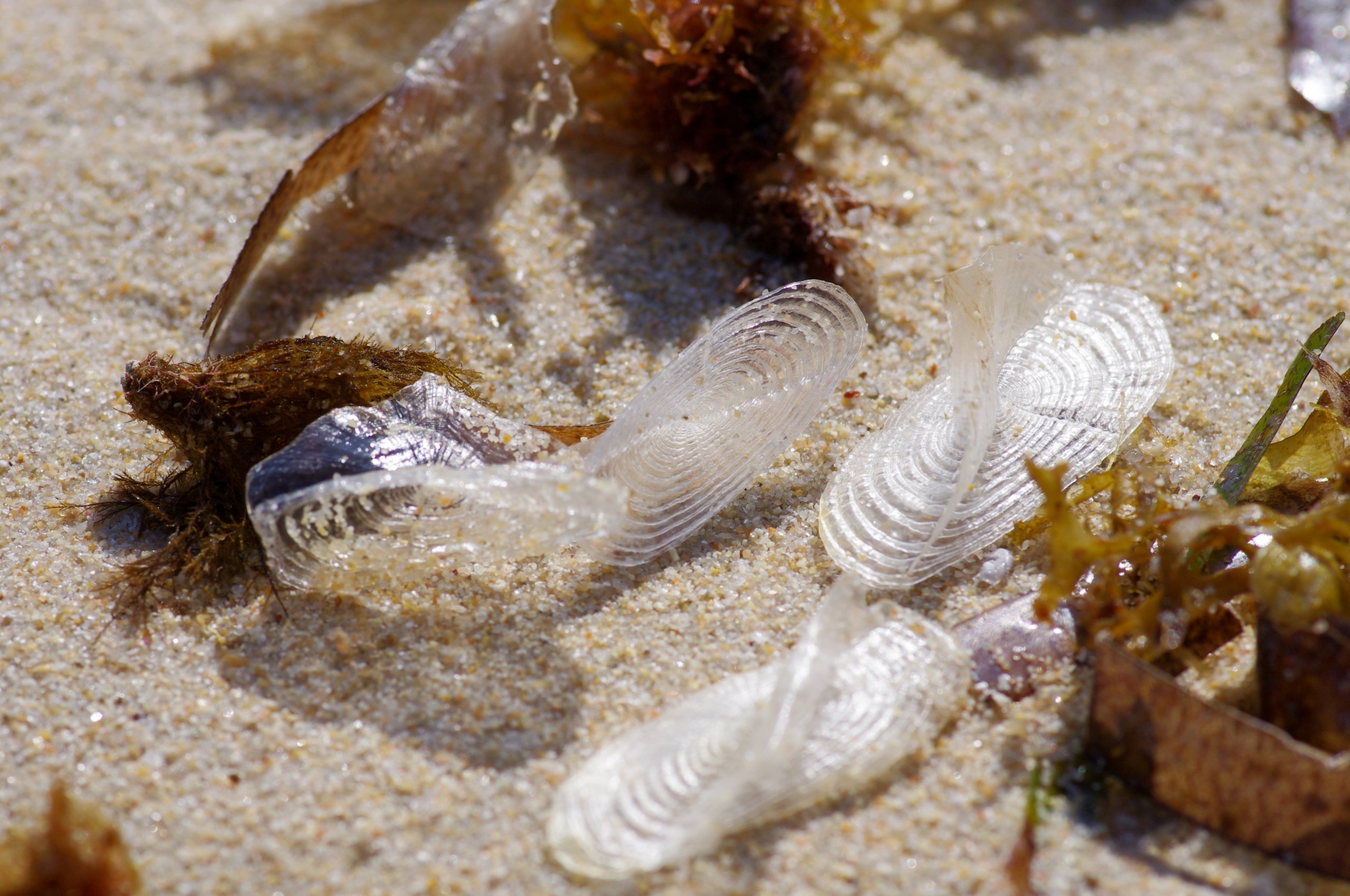 Skeletons of by-the-wind-sailors, Velella velella, washed up on Corsica.

Thecate hydroids are a separate order of hydrozoa. They derive their name from the fact that the polyps are in a “cup” called hydrotheca. Not all species produce jellyfish, there are also species where the reproductive stage remains attached to the polyp during fertilization and larval production.

In general thecate hydroid jellyfish have a flattened and disc-shaped body. They usually catch their food, plankton, by actively swimming so that the water flows along the often many fine tentacles. 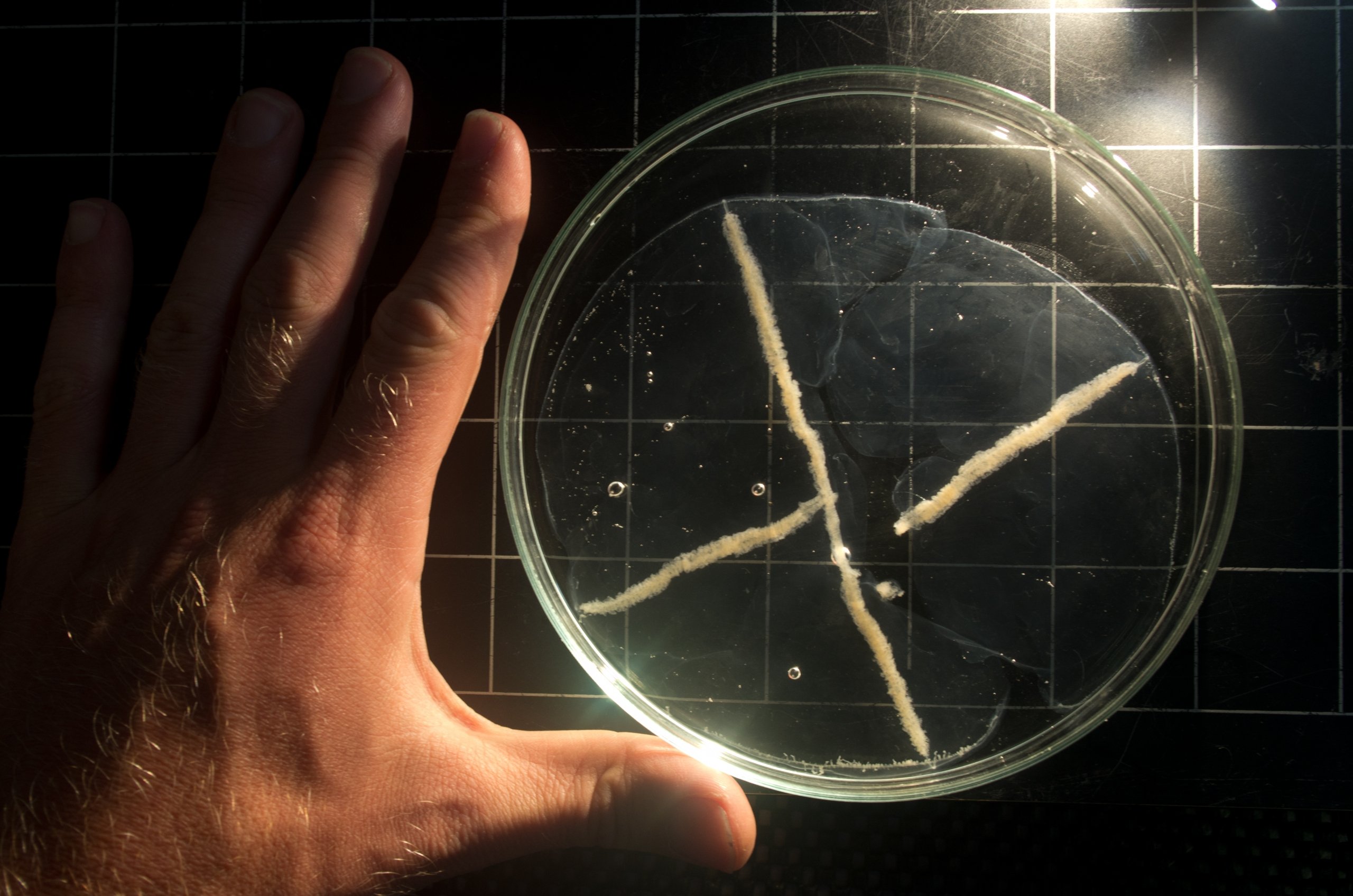 Staurophora mertensii, caught in the North Sea. This is one of the largest hydroid jellyfish. The white cross contains the digestive system and reproductive organs.

Athecate hydroids (order Anthoathecata) have polyps that live solitary or in colonies and are not protected by a hydrotheca. Most athecate hydroid jellyfish have a bell-shaped body with a central stomach stem. They often swim by pulling the bell together so that the water is squeezed out. To catch food they often float slowly or sink down to catch animal plankton with their tentacles equipped with stinging cells.

A special hydroid jellyfish is the by-the-wind-sailor Velella velella. The polyps form floating colonies that eat plankton. They have a a sail, through which they are propelled by the wind. The colony also produces small jellyfish for reproduction. 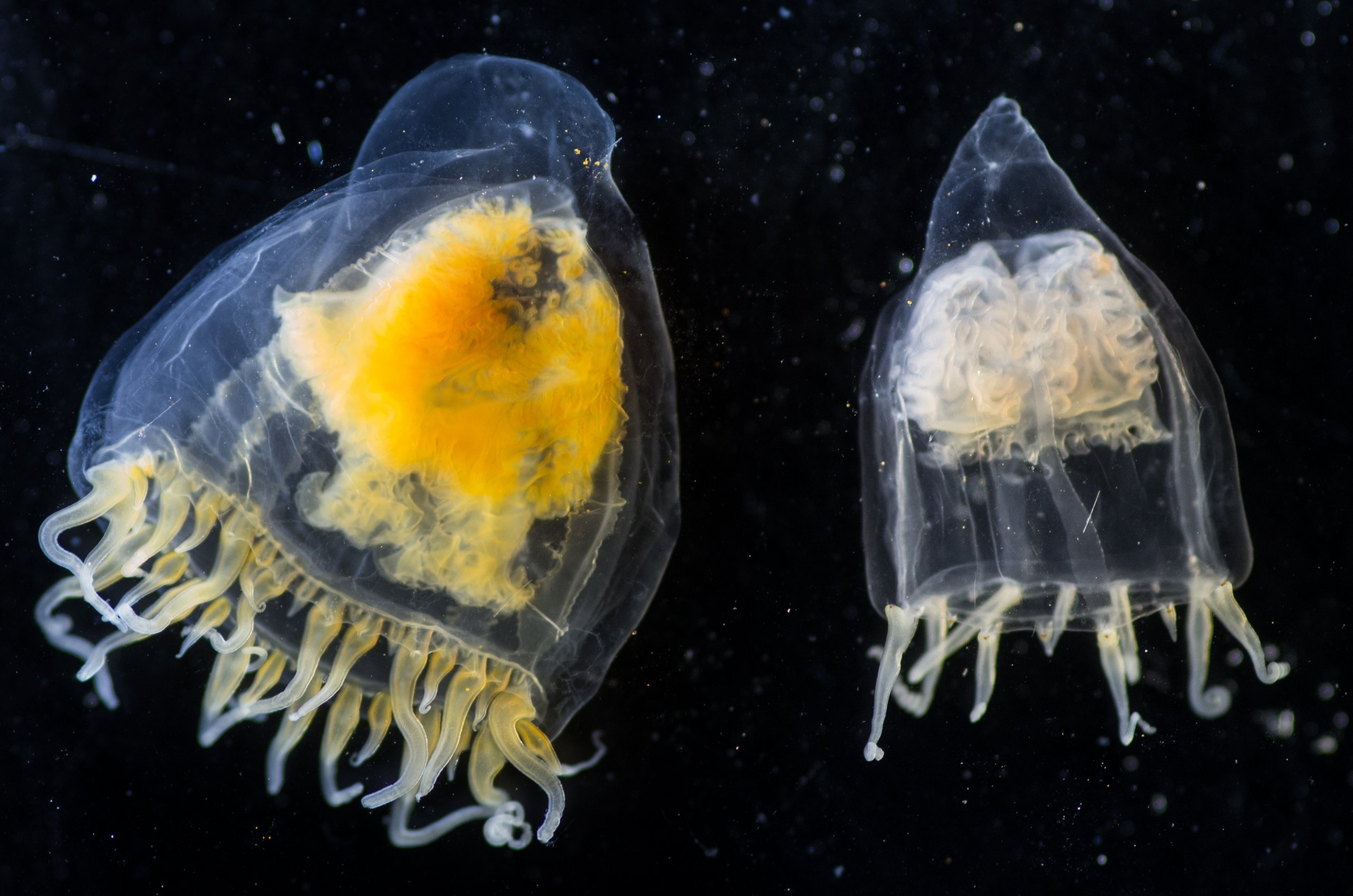 You can also find jellyfish in fresh water! The freshwater jellyfish Craspedacusta sowerbii is a common species in all types of water. It is thought to be an invasive species, spread across the world in aquarium and pond plants. This species also lives as a very small polyp on water plants or stones. They are often seen after a period of very warm weather. The freshwater jellyfish are a few centimetres big and eat plankton.