Copepods are an extremely diverse group with more than 10,000 species. In many ecosystems copepods are the most common multicellular animals in the plankton. Many copepods live associated with other animals, often as parasites.

The body of calanoid and cyclopoid copepods can be divided into a carapace (prosome) and abdomen (urosome). In harpacticoid copepods the body seems to consist of one part. On the head there are two antennas. Copepods can have several eyes.

Copepods have several sets of legs of which usually the front set is used for collecting food and the back set for swimming. Many species can also jump away quickly by flipping their tail. They can do this so fast that they are (relative to body length) the fastest jumpers in the world, comparable to a human jumping at over 6000 km/h!

The life cycle of copepods starts with an egg. Many species carry the eggs for a while in egg sacs on the urosome, but some release the fertilized eggs directly into the water. Out of the egg comes a nauplius larva that looks like a small spider (see film below). The nauplius larva eats plankton, sheds its skin six times and turns into an immature copepod (copepodite). It sheds five more times until it eventually becomes a male or female copepod. Copepods reproduce sexually, and often have complicated mating rituals. Males often have specially adapted antennae or legs to grab the female.

Copepods eat anything. The smallest species eat mainly single-celled plankton, larger species eat mainly algae and the largest species are often predators that eat other zooplankton, including other copepods. copepods themselves are an important food source for many aquatic animals and an extremely important link in the food chain. Many species of copepods store lipids (fats) from their food in their bodies as food supplies and for buoyancy. These lipids can often be observed as round oil globules within the animal. When copepods are eaten by fish such as herring these fish absorb the fats, which is why herring and the like are rich in fatty acids such as omega-3.

A freshwater copepod from Wageningen, filtering food particles from the water.

Calanoid copepods are often the most common group in marine zooplankton. They are usually recognizable by their streamlined body and long antennae. Most calanoid copepods live their whole life in the water. They are usually filterer feeders that use their finely haired legs to filter particles, such as algae and micro zooplankton, out of the water. The long antennae are used as a kind of parachute so that they do not sink as quickly, but above all, are  a very sensitive organ for detecting approaching enemies.

Like water fleas, many calanoid copepods have special “resting eggs” that can survive at the bottom for a long time. In spring the nauplius larvae hatch and develop into a first generation of adults. In spring and summer, copepods can then produce eggs that hatch much faster, allowing them to grow rapidly in numbers throughout the year. Towards the end of the year they produce resting eggs that sink to the bottom. Other species use a different strategy to get through the winter and go into a kind of “hibernation”, such as the common species Calanus finmarchicus. 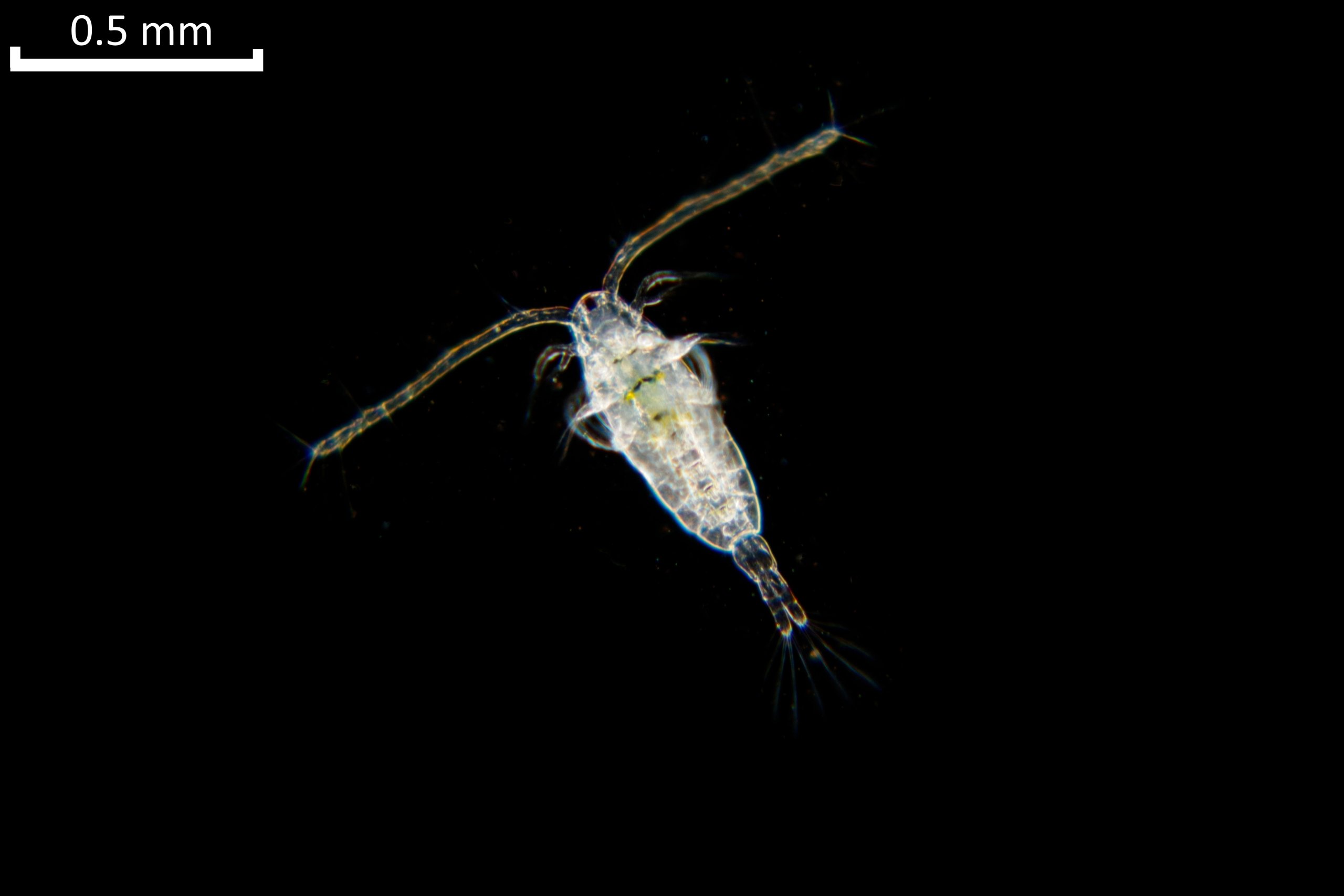 A calanoid copepod (Acartia sp.) from the Oosterschelde, viewed from below.

Cyclopoid copepods often have slightly shorter antennae and a somewhat plumper, rounder body than calanoid copepods. Many species also carry their eggs in two egg sacs. Most species of cyclopoids live in or on the soil. They are often predators that swim up and then let themselves sink down again to sneak upon prey.

Cyclopoid copepods can be very common especially in fresh water, for example species of the genus Cyclops.

Freshwater copepods such as Cyclops can sometimes be carriers of pathogens such as the bacterium that causes cholera, which can make people who drink water with copepods sick. 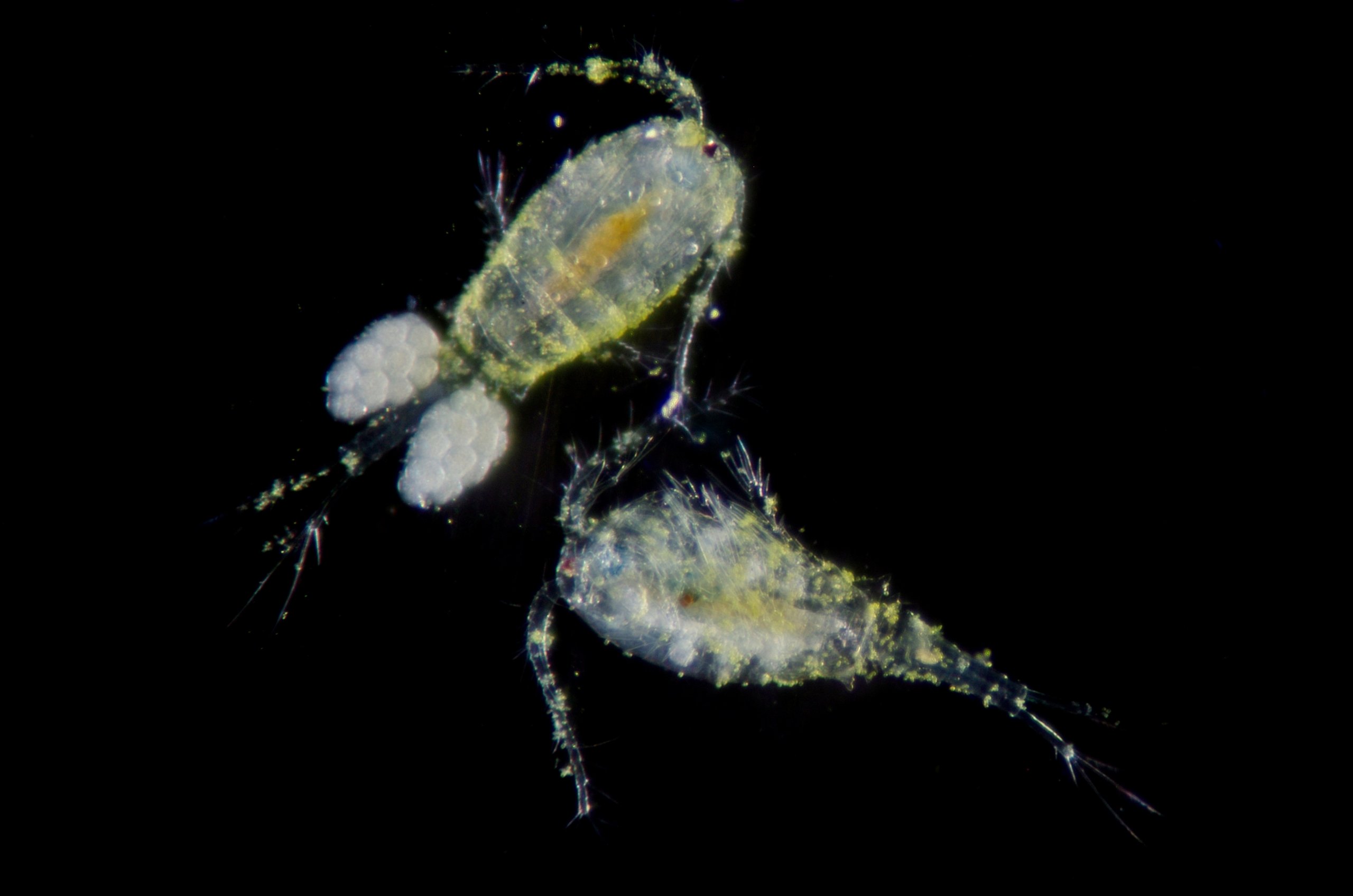 Two cyclopoid copepods from Wageningen, Netherlands. In the top left a female with the telltale two eggsacs.

A cyclopoid copepod from Wageningen, Netherlands with colonial ciliates on her antennae and cephalothorax.

Harpacticoid copepods usually live on or in the seabed. Their appearance shows adaptation to this; they are streamlined and have only small tentacles so that they can crawl between grains of sand. They do not have the clear division between carapace and tail that the calanoid and cyclopoid copepods do.

Harpacticoid copepods usually eat detritus (waste particles) and unicellular organisms that live between and on the sand grains.

There are a few species of harpacticoids that do spend their whole life in the water, such as Euterpina acutifrons and Microsetella norvegica.

A harpacticoid copepod from Oosterschelde, Netherlands.